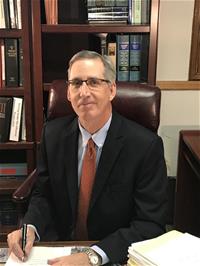 As the felony prosecutor in Plumas County, Mr. Hollister improved the office's conviction rate while successfully prosecuting, at jury trial, crimes ranging from assault on a peace officer to domestic violence to homicide. In addition to his courtroom work, Mr. Hollister has provided training for law enforcement, governmental and community groups in and around Plumas County.

While serving in Alameda County, Mr. Hollister successfully prosecuted over 35 jury trials to verdict including the attempted murder of a CHP officer, the Glenview Rapist, the Maya Motel Homicide and the kidnap and rape of a 7 year old girl.

"My family and I love living in Plumas County. Whether coaching my kids' basketball teams, volunteering in our schools, or fly fishing on the Feather River, I am deeply rooted here and look forward to working for and protecting the people of Plumas County. As your District Attorney, I will work hard on a daily basis, accepting the difficult challenges with skill, honor, and humility while never forgetting 'public service' means I serve the public and not that the public serves me."