The State of California requires that every county and city have a comprehensive,
long term general plan to guid 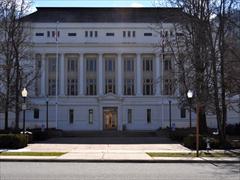 In 2009 Plumas County hired the consulting firm "Design Workshop" to provide project management for the general plan update. In order to develop and adopt a General Plan with broad public acceptance and support, public engagement was critical. The project included a robust public engagement effort throughout the process.

On December 17, 2013 the Plumas County Board of Supervisors adopted the 2035 General Plan.